Available in our stock as a Refurbished robot.

Desciption of the robot:

For nearly 15 years, ABB’s IRB 360 FlexPicker has been the leader in state-of-the-art high speed robotic picking and packing technology. Compared to conventional hard automation, the IRB 360 offers much greater flexibility in a compact footprint while maintaining accuracy and high payloads.

ABB’s IRB 360 family of robots, more commonly known as the FlexPicker, are capable of the fastest picking applications and have been optimized for packing applications. The robot has outstanding motion performance with the shortest cycle times, precision accuracy, and high payloads.

Featuring outstanding motion control, short cycle times, and precision accuracy, an IRB 360 can operate at very high speeds in anything from narrow to wide spaces with very tight tolerances. Every FlexPicker also benefits from a re-engineered tool flange which can accommodate larger grippers, allowing for efficient handling of flow wrapped products at high speeds from an indexing belt. 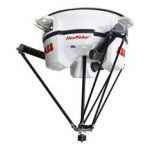